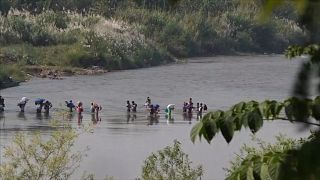 Villagers from Myanmar fled across the Thai border on Saturday as fighting flared between between their government and ethnic Karen forces.

Villagers from Myanmar fled across the Thai border on Saturday as fighting flared between between their government and ethnic Karen forces.

Panic-stricken villagers waded through Moei River to cross into Thailand amid the sound of gunfire and mortar bombs.

Witnesses saw a helicopter over Lay Kay Kaw, a small town in Myanmar near the Thai border that is controlled by the Karen guerrillas who are seeking greater autonomy from the central government.

Fighting has intensified since February, when the military seized power from the elected government of Aung San Suu Kyi, and guerrillas offered refuge to opponents of the army.

The most recent clashes were triggered by a raid last week by government soldiers on Lay Kay Kaw.

Usually Thai authorities allow villagers to stay for a few days and then return to Myanmar when the situation has improved.

This week, a Thai Defense Ministry spokesperson more than 4,000 villagers has crossed into Thailand between Dec.16 to Dec.21 because of skirmishes between the Myanmar government and ethnic Karen forces.