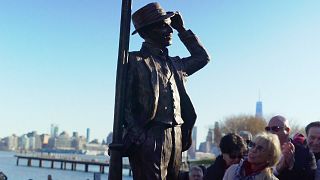 Hollywood legend Frank Sinatra was honored with a life-size bronze sculpture in his hometown of Hoboken, New Jersey on Sunday (12 December 2021).

On what would've been his 106th birthday, the crowd sang happy birthday to the singer and actor. Sculpted by Carolyn Palmer, the unveiling event was attended by his daughter, Tina Sinatra, along with Joe Piscopo.

Considered to be one of the greatest entertainers of the 20th century, Sinatra, known for songs such as "Fly Me to the Moon" and "New York, New York," the 1954 best supporting actor Oscar winner died from a heart attack in 1998.