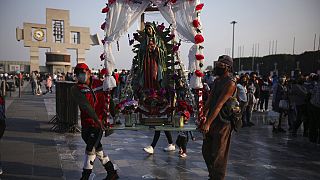 Hundreds of pilgrims cycled or walked to the Basilica of Our Lady of Guadalupe in Mexico City on Friday ahead of the Virgin of Guadalupe's feast day.

One of the world's largest religious pilgrimages resumed after being cancelled due to the coronavirus pandemic last year, with Mexicans finally being able to walk into the basilica where they will pay their respects to Mexico's patron saint on Sunday.

Believers walked and cycled long distances to show their devotion for miracles they had been granted.

Pilgrims carried images and statues of the "Virgen Morena" (dark-skinned virgin), as she is affectionately known, a tradition that dates back five centuries.

The Virgin is said to have appeared to a native Mexican peasant named Juan Diego in December 1531.

According to tradition, the peasant spoke to the local bishop, who asked for a sign to prove his vision's authenticity.

It is said that days later, the image of Mary appeared miraculously on Juan Diego's apron when he was showing it to the bishop.

The bishop then ordered a church built, dedicated to Saint Mary of Guadalupe.

The apron believed to have belonged to Juan Diego hangs above the altar in the New Basilica.