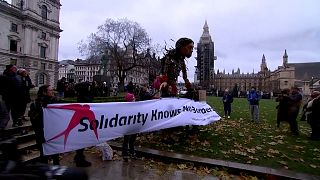 A giant puppet of a Syrian refugee child created to symbolize millions of displaced children arrived on Tuesday in Parliament Square in London, as lawmakers debated a new bill on border control.

A giant puppet of a Syrian refugee child created to symbolize millions of displaced children arrived on Tuesday in Parliament Square in London, as lawmakers debated a new bill on border control.

The puppet posed next to members of an NGO who held up a banner reading: ''Solidarity knows no borders".

The puppet was designed as part of The Walk, a traveling festival of art and hope to raise awareness of the problems faced by young migrants.

The puppet arrived in October in southeast England on the last leg of a 5,000-mile (8,000-kilometer) journey across Europe from the border of Syria.

The puppet has travelled through much of Europe after setting off from the Turkish-Syrian border in July and has been greeted by thousands of people along the way, including Pope Francis in Rome.

Little Amal was created by Handspring, the company that made the equine puppets for hit West End and Broadway theater show "War Horse."

The idea of Little Amal's journey in search of her brother evolved from "The Jungle," a play about migration and displacement produced by Good Chance Theatre, set in a camp in northern France where migrants gather hoping to reach Britain.

Migrants from around the world have long used northern France as a launching point to reach Britain, either by stowing away in trucks or in dinghies and small boats organized by smugglers.