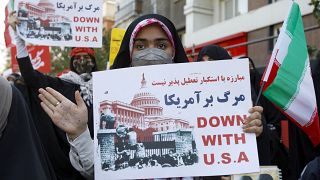 Thousands gather on anniversary of 1979 US Embassy seizure

Thousands of Iranians gathered on the streets of Tehran to mark the anniversary of the storming of the US Embassy in 1979.

They chanted "Death to America" and "Death to Israel," while burning American and Israeli flags.

The embassy takeover triggered a 444-day hostage crisis and break in diplomatic relations that continues to this day.