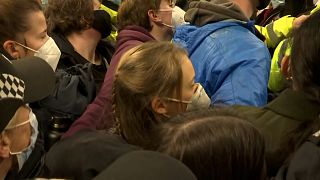 A media scrum awaited the 18-year-old as she arrived at Glasgow train station, and police officers had to escort her through the crowd.

Many environmentalists are calling the October 31-November 12 summit the world’s last chance to turn the tide in the battle against climate change.

The summit in Glasgow is taking place a year late because of the coronavirus pandemic.

Under the Paris pact, nations must revisit their previous pledges to curb carbon pollution every five years and then announce plans to cut even more and do it faster.

The hope is that world leaders will cajole each other into doing more, while ensuring that poorer nations struggling to tackle climate change get the financial support they need to adapt.