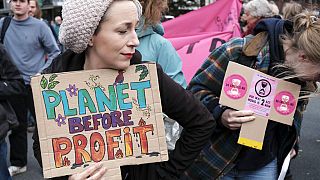 Protesters from the environmental group Extinction Rebellion demonstrated in The Hague on Monday.

The protesters held banners and placards, chanted slogans and pushed a large boat around which was later removed by police.

According to Extinction Rebellion, the group will seek to "block the heart" of the Hague from October 11 to October 15 and declare a climate emergency.

They are asking the Dutch government to act now and make the Netherlands climate neutral in 2025 in a just manner.

Other demonstrators marched through Brussels on Sunday, dressed as endangered fish or tigers or wearing toy animals on their heads, to push world leaders to take bolder action to fight climate change at the U.N. climate summit in Glasgow starting this month.

Thousands of people and 80 organisations took part in the protest, aiming for the biggest such event in the European Union's capital since the start of the coronavirus pandemic, which stopped the climate movement’s weekly marches in its tracks.

Scientists say there's little doubt that fuel emissions are contributing to extreme weather events like the droughts, fires, floods that have hit regions around the world this summer.

Environmentalists worry that the U.N.'s 26th Climate Change Conference of the Parties, known as the COP26, in Glasgow starting Oct. 31 will produce policies that don’t do enough to slash carbon emissions and slow the warming of the planet.

The 12-day summit aims to secure more ambitious commitments to limit global warming to well below 2 degrees Celsius with a goal of keeping it to 1.5 degrees Celsius compared to pre-industrial levels.

The event also is focused on mobilising financing to fight climate change and protecting vulnerable communities and natural habitats.

The crowd at Sunday's protest included a mix of people with and without masks.

With one of the world’s highest vaccination rates, Belgium is starting to ease virus restrictions and allow such gatherings again.