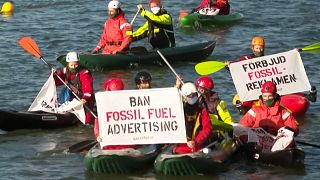 Dozens of Greenpeace activists blocked a Shell oil refinery in the Dutch port of Rotterdam with boats on Monday to protest against advertising for fossil fuels.

The environmental group's activists used a sailboat, kayaks and dinghies to block the entrance to the refinery.

Dutch police later arrested 22 activists and expelled a group of protesters who had climbed onto an oil tank and raised slogans.

Greenpeace and 20 other groups have launched a petition asking the European Union to ban advertising and sponsorship by fossil fuel companies.