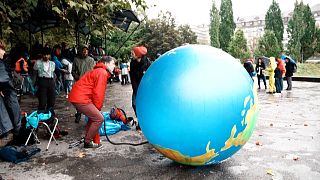 Nearly 300 Extinction Rebellion activists, some dressed as clowns, attempted to blockade the center of Zurich on Monday to force the Swiss government to heed the environmental movement's climate demands.

Students and senior citizens were among those who descended on Zurich from all corners of the wealthy Alpine nation, unfurling banners and holding up large sheets of blue plastic symbolizing oceans choked with waste.

Others set up a boat daubed with slogans about the climate crisis, "because we are all in this together," said one activist.

In June, XR petitioned the Swiss government to "officially" recognize the climate emergency and mandate a citizens' assembly on "climate and ecological justice," warning that its activists were also ready to engage in civil disobedience.