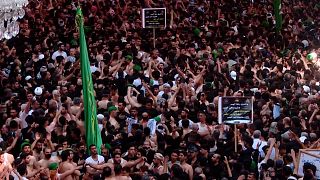 Hundreds of thousands of Shiite Muslim pilgrims on Tuesday converged on the Iraqi city of Karbala to commemorate the Arbaeen, the end of the 40-day mourning period for the death of Imam Hussein, Prophet Muhammad's grandson.

Pilgrims beat their heads and chests in ceremonial rituals around the city's iconic Imam Hussein Shrine.

The pilgrims arrived in Karbala from Baghdad, Basra and other parts of the Shiite Islam world, most of them walking long distances as part of the pilgrimage.

The festival is thought to be one of the largest regular gatherings in the world, dwarfing all other pilgrimages, including the Hajj.

The death of Imam Hussein, in the 7th century, cemented the split in Islam between Shiite and Sunni Muslims.