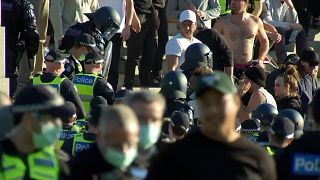 Riot police and mounted officers moved on the protesters arresting several people at the city's Shrine of Remembrance.

Demonstrators had earlier marched in Australia's second-largest city to protest against mandatory coronavirus vaccine rules in the construction industry.

The protesters moved around the streets in small groups, with heavily armed law enforcement officers including riot police deployed in large numbers throughout the city.

The protests over the past two days were aimed at a Victoria state government mandate requiring all construction workers to get vaccinated.