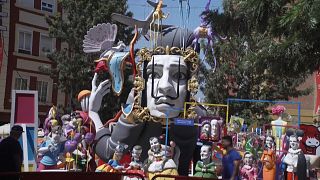 The city of Valencia celebrates its most important festival, Las Fallas, after being canceled last year due to the pandemic.

Usually Las Fallas is held in March, with the last night being on March 19th, but, because of the restrictions in place in March, this year’s event was postponed until September 1st and it will be held until the 5th.

Some health restrictions have been introduced again for this year’s festival such as the mandatory use of masks in the streets and the curfew at 1 a.m.

During this festival, huge elaborate papier-mâché sculptures called fallas are set up across the city.

On the last night, they are ceremoniously burned during the Nit de la Cremà during a crazy firey display.

The fallas represent anything from satirical scenes featuring Spanish and foreing politicians to scenes from popular stories and legends. Prizes are awarded for the best ones.

Besides the fallas themselves, one of the most important events to watch is when groups of falleros dressed in traditional costume parade through the city streets to offer flowers to a giant statue of La Virgin – Our Lady of the Forsaken – in front of the Cathedral. Each bunch of flowers is added to her dress until her costume is made up of fresh flowers.