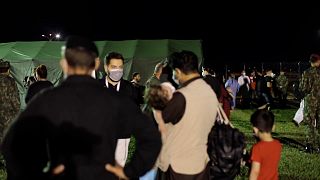 The first group of refugees fleeing the Taliban after their takeover of Kabul have arrived in Albania in the early morning of Friday.

121 men, women and children were subject to the mandatory security and medical checks at Tirana's airport before heading to their temporary residences set up at several hotels in the city of Durres.

Calling the arrival of the first refugees an emotional moment, Albanian Foreign Minister Olta Xhacka stated that Albania has accepted to temporarily shelter around 4.000 Afghans, while their documents get processed for their final destination, the US.

The cities of Tirana, Durres and Berat are where the Afghan refugees will be temporarily provided shelter, before heading to their final destination, the US.

Kosovo is also engaged in this initiative and is currently expecting around 2.000 refugees from Afghanistan, expected to stay for the duration of a year.