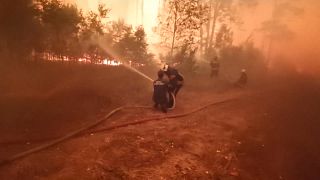 Russia: Firefighters trapped in fire manage to escape from forest.

Employees of the Russian Emergencies Ministry and the military personnel of the Ministry of Defense got surrounded by flames in the middle of the forest on the border with the Nizhny Novgorod region.

A group of 55 people and 18 pieces of equipment was sent to extinguish the fire on 23 August when, all of a sudden, the wind rose, and the fire turned into a crown fire, rapidly spreading over large areas, surrounding the group.

People with equipment were trapped in a circle of flame and cut off from escape routes. The main goal now was to try to find a way out of the fiery trap. The primary task was not to let the fire close to people and equipment.

Thanks to well-coordinated actions and incredible efforts, the crown fire was localized while the ground burning continued creating a strong smoke, so it was necessary to evacuate the personnel from the fire captivity as quickly as possible.

A second group of firefighters of the Specialized Fire and Rescue Unit and rescuers of the Volga Regional Search and Rescue Unit of the Emergencies Ministry of Russia has been sent to rescue the people. A tanker truck and heavy equipment were sent to help localize the fire on the escape routes.