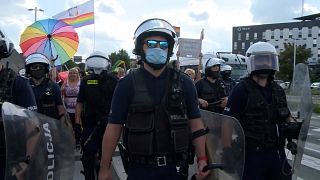 Parades for LGBT rights took place under heavy police presence on Saturday at the foot of Catholic Poland’s most revered monastery in Czestochowa, in the south, and in Gdansk, on the Baltic coast.

The massive police presence, which included officers on horseback, was seen as the factor that prevented any clashes with far-right groups, which shouted anti-LGBT slogans like “No homosexual love” at the marchers in Czestochowa.

There had been previous cases of violence by far-right groups against Equality Parades in Poland, especially in Czestochowa, at the foot of Poland’s 15th-century Jasna Gora Monastery.

The far-right groups have support from Poland’s right-wing, nationalist government, which stresses the nation’s historic attachment to traditional Catholic values.

Czestochowa’s 3rd Equality Parade was undisturbed Saturday even though far-right activists came from other cities to show their opposition to it.