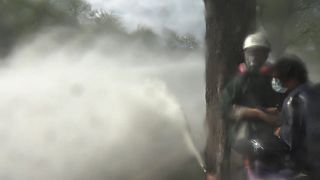 Thai protesters call for PM to resign over virus crisis

Thai police used tear gas and water cannon to disperse protesters marching toward the government house calling for the Thai Prime Minister to resign over his mismanagement of COVID-19 crisis.

Hundreds of demonstrators rallied on Sunday despite the government had issued strict measure prohibiting the gathering of more five people in Bangkok to curb the surge of COVID-19 pandemic.

The rally was led by Free Youth, a student protest group, which drew several thousands of protesters in its anti-government protests that begun in July last year.

The protest movement took a hiatus during surges of outbreaks and when several of protest leaders were held in custody.

Thailand continues to see a rise in the COVID-19 cases, reporting a record high number on Sunday.

Health authorities reported 11,397 new cases and 101 deaths on Sunday, bringing its total since the pandemic began last year to 374,523 confirmed cases and 3,2047 deaths.

More than 90% of the cases and 95% of the deaths have occurred since early April.