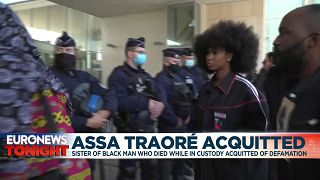 Assa Traoré, sister of black man who died while in custody in France, acquitted of defamation

The sister of a black French man who died in police custody in 2016, has been acquitted of defamation charges brought against her by police officers. Assa Traoré publicly named three policemen, accusi