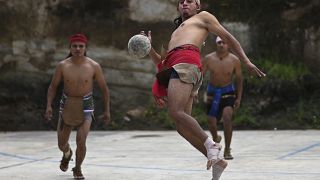 Through an ancient ball game in which only the hip can be used to hit the ball, Maya peoples in Guatemala hope to "strengthen the cultural identity of young people." The only 11 teams in the country, including one women's team, participate in a tournament to commemorate the solstice ahead of another that will be played in September and is a qualifier for the Mesoamerican Championship to be held between 2 and 5 December in Yucatan, Mexico.