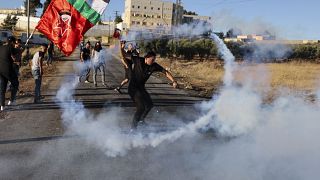 Palestinian activists in Gaza fired incendiary balloons toward Israeli farmland across the frontier in the first resumption of violence since a shaky cease-fire ended an 11-day war between Israel and Gaza's Hamas rulers last month.

The masked activists brought helium gas cylinders, inflated the balloons, attached small pieces of burning rugs to the bright balloons and sent them across the frontier.

Tensions ran high in east Jerusalem, hours before a planned march by Jewish ultranationalists that poses a test for the country's fragile new government and the tenuous truce with Gaza's militant Hamas rulers.

Palestinians consider the rowdy march, which usually winds through the Old City's Damascus Gate and into the heart of the Muslim Quarter, a provocation.

Hamas has called on Palestinians to “resist” the parade, a version of which was held at the height of last month's unrest in the city and helped ignite the 11-day Gaza war.

Rallies by far-right Jewish groups in Arab neighbourhoods have raised tensions in recent months, prompting a police intervention in the flashpoint Al-Aqsa mosque compound that triggered the deadliest flare-up of Israeli-Palestinian violence since 2014