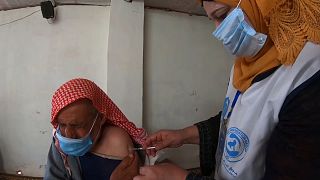 The second phase of a vaccination campaign in rebel-held parts of northwestern Syria began on Monday with dozens of people getting inoculated against coronavirus.

The first phase got underway in Idlib province in early May, targeting medical staff and aid workers.

On Monday, elderly people and those with chronic diseases began getting the jab.

In the al-Tah camp, some 55 people were vaccinated on Monday, according to the camp's director.

Some 3,800 AstraZeneca vaccines were delivered to northwest Syria through Turkey on April 21.

The vaccines come amid a surge of infections in the war-torn country.

There are over 24,000 confirmed infections in rebel-held Idlib province, home to four million people, most of them displaced from different parts of Syria by the conflict.

At least 692 people have died in the area from COVID-19 related complications.

The conflict has subsided in the area, but outbreaks of violence are still reported.