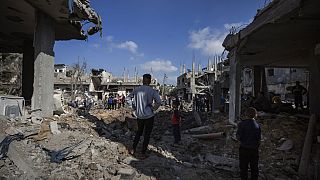 Israel bombarded Gaza with artillery and air strikes on Friday following a new barrage of rocket fire from the Hamas-run enclave, intensifying a conflict that has now claimed 127 lives.

The most intense fighting between Israel and Palestinian militants in Gaza since 2014 has been accompanied by an unprecedented outbreak of mob violence between Jews and Arabs inside Israel.

Palestinians assess the damage caused by Israeli air strikes, in Beit Hanun in the northern Gaza Strip. Israel pounded Gaza and deployed extra troops to the border as Palestinians fired barrages of rockets back.

Residents of the southern Israeli coastal city of Ashkelon inspect their damaged homes after they were hit by dozens of rocket from Gaza late on Thursday.

The conflict has killed 127 Palestinians, including 31 children, and wounded more than 830, Gaza's health minister said.

An Israeli woman in her 80s died overnight from injuries sustained while seeking shelter from rocket fire, bringing the toll on the Israeli side to eight dead, including a six-year-old boy and a soldier.