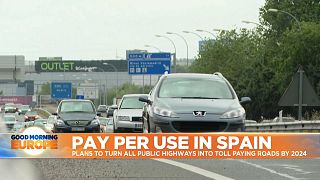 Spain is planning to turn all of its public highways into toll-paying roads within three years.

The government in Madrid says every driver should pay for their own usage of the motorways, as opposed to relying on public money for their upkeep. Under the new plans, drivers would have pay to use all of Spain's high-speed motorways, as well as other national and regional roads.

Sergi Saurí is Director at the Center for Innovation in Transport, a research group based in Barcelona. He says the introduction of such a scheme would be a radical change, but it's something the Spanish have been expecting.

“In some countries, this is an already established system. And also in addition to that and what is common in other European countries, all that money from the taxpayer will be going to the maintenance."

Flat yearly fee or pay per use?

A flat price for a year means drivers could pay a yearly fee and use the network as much as they want, and the alternative is pay per kilometre.

He thinks that pay per use, or based on the distance driven is the environmental choice.

"It's charging based on how much you're polluting. So at the end of the day, it makes sense to charge based on the distance."