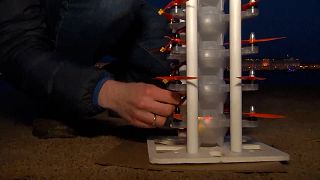 On 2 May Saint-Petersburg hosted the International Drone Festival, it took place above the Neva river between the Hermitage State Museum and Peter and Paul Fortress.

500 drones flew into the sky and formed various shapes - a sailboat, drawbridges, the Lakhta Center, the Alexander Column and other symbols of Saint-Petersburg, as well as football players and UEFA symbols - the city will soon host the football championship.

The show was held as a symbol of the opening of the tourist season in Saint-Petersburg.