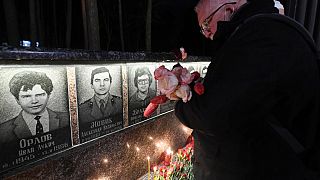 Ukrainians lit candles and laid roses on Monday to commemorate those who died after the 1986 Chernobyl nuclear disaster, during a ceremony at the memorial to Chernobyl firefighters in the city of Slavutych.

Slavutych was built following the evacuation of Pripyat, the workers' town just 1.5 kilometers (one mile) away from the plant.

Some 50,000 Pripyat residents were evacuated after the disaster, taking only a few belongings and never to return.