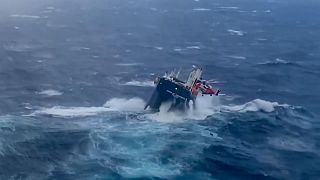 A Dutch cargo ship running adrift was in danger of capsizing on Tuesday after it encountered rough weather conditions off the coast of Norway.

Crew members onboard the Eemslift Hendrika had raised an alert in the North Sea on Monday prompting the Norwegian Coast Guard to launch an operation to evacuate the 12-person staff off the vessel.

Footage posted by the Coast Guard showed rescuers airlifting the crew from the ship as it was battered by waves of up to 15 metres in height.

Some crew members were seen being airlifted from the sea while others were rescued from the ship's deck.

All of the 12 were brought to safety.

Norwegian officials told state broadcaster NRK that the 111 metre (366 feet) Netherlands-registered ship, which was transporting smaller yachts, had lost power in its main engine and was now drifting towards land.