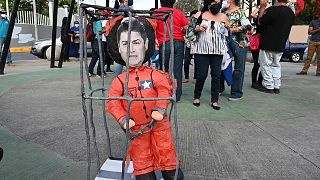 Opposition supporters celebrate after Juan Antonio "Tony" Hernandez, brother of the president of Honduras, was sentenced to life in prison by a New York judge on Tuesday.

This followed a trial in which the Central American leader was himself implicated. Honduran President Juan Orlando Hernandez has denied all allegations of drug trafficking.