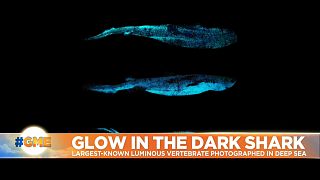 Scientists studying sharks off New Zealand's coast have photographed a shark species that glows in the dark.

It is the largest-known luminous vertebrate to date.

Researchers from the Université Catholique de Louvain in Belgium and the National Institute of Water and Atmospheric Research (NIWA) in New Zealand were involved in the discovery.

They say that the findings had repercussions for our understanding of life in the deep sea; one of the least-studied ecosystems on the planet.

Dr Jerome Mallefet, who is the lead researcher at the Marine Biology Laboratory at the Louvain Catholic University, which discovered the glow-in-the-dark sharks told Euronews that "it was a dream" for him to be able to photograph the beast.

"We know that out of 540 species of shark, 57 are able to produce light. But these elusive sharks are living 200 meters below (the ocean surface) so very difficult to observe," Dr Mallefet added.