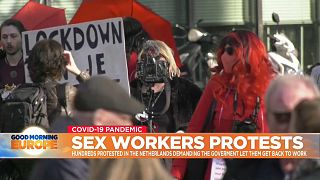 Dutch sex workers protest for right to get back to work

Sex workers in the Netherlands took part in a demonstration demanding the right to get back to work.

Other "contact professions" such as hairdressers, beauty salons and masseurs were allowed to reopen from Wednesday, but people working in the sex industry have been told they must wait.

The move to allow certain people to go back to work, which the government last week called a "risky relaxation strategy", came despite infection numbers starting to edge higher recently.

Melissa is a sex worker from Arnhem and said that she has to pay her rent just like everybody else: "Why can everybody work except us and who is going to pay our rent? Because we don't have any financial support from anyone. We just have to save ourselves."

The protests come amid growing lockdown fatigue not only in the Netherlands but across the European Union, where governments are still attempting to rein in new infections, while slowly ramping up the pace of vaccinations.