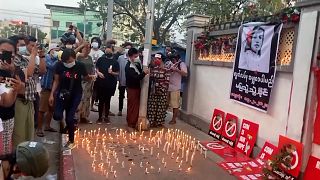 Candles were lit in Myanmar on Friday in tribute to a young protester who died in hospital more than a week after she was shot in the head by police.

Mya Thwet Thwet Khine had been demonstrating against the country's military coup, which happened on February 1.

She was shot on February 9, two days before her 20th birthday.

Around 200 people came to light candles and lay roses beside her photograph on Friday, at sunset on the main road in Mandalay, Myanmar's second city.