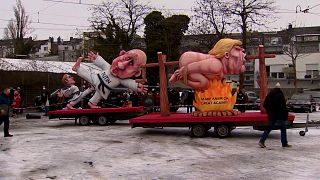 Floats are wheeled out in Dusseldorf, their wheels squeaking.

Normally that sound would likely be drowned out by the crowds enjoying the city's carnival. But coronavirus has seen people banned from such events.

But organisers were determined to let some part of it go ahead.

So the floats, which mocked the likes of Vladimir Putin, Donald Trump and German politicians, made their way through the German city.