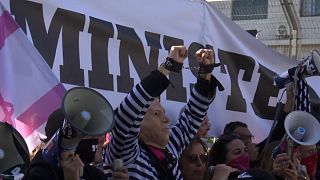 Protesters wait for Netanyahu as he leaves court

He appeared before a Jerusalem court on Monday to answer corruption charges, just weeks before national elections in which he hopes to extend his 12-year term in office.

Netanyahu was indicted last year on charges of fraud, breach of trust and accepting bribes, in three separate cases.

In recent months, Israelis have held weekly protests calling for his resignation over the indictments and criticising his government's response to the coronavirus crisis. Protesters gathered outside the court could be heard inside the courtroom where the hearing was being held.