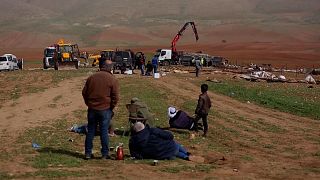 Israeli forces on Wednesday demolished structures in the Palestinian community of Khirbet Humsu in the occupied West Bank, for the third time in as many months.

Bulldozers and other heavy equipment pushed into the community on Wednesday, demolishing tents, animal pens and sheds, and carting off some of the structures.

Khirbet Humsu is home to around 75 Palestinians who raise sheep and say they have nowhere else to go.

"This is my land, I'm living on my land," said resident Walid Abu Elkbash.

Israel demolished the entire community in early November, as world attention was focused on the US elections.

They returned on Monday and again on Wednesday to demolish more structures.

After the demolition, the residents of the community immediately went to work, repairing their animal pens.

They say Israel wants to remove them to pave the way for the expansion of Jewish settlements.

The Israeli military did not immediately respond to a request for comment.

In November, it said the structures were demolished because they had been built without permission.

Israel seized the West Bank in the 1967 war, and the Palestinians want the territory for their future state.

Khirbet Humsu is in the 60% of the West Bank known as Area C, which is under full Israeli military control.

Ale, a baby white rhino born on June 9 in Havana, strolls curiously with his mother Katherine.