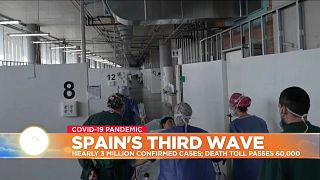 In a bid to reopen the country, the government in Denmark has announced plans to introduce a digital coronavirus passport for citizens to provide evidence they have been vaccinated.

Danes will be able to prove they have received their COVID-19 vaccine using an app under plans unveiled by Denmark's finance minister, Morten Boedskov.

The move is seen as a means of kickstarting travel as well as various other economic sectors, including the entertainment and hospitality industries.

"There are also parts of Danish society that need to move forward. There is a business community that needs to be able to travel and therefore I am pleased to be able to announce today... a digital corona passport".

The digital "Corona Pass" is still in development but could be launched in the next two to three months "to hopefully begin a gradual, calm re-opening of the Danish society," according to Boedskov.

"There are ongoing international discussions between different EU leaders about the possibility of a 'Corona pass,' but no decision has been made so far. But especially those countries that are heavily dependent on tourism hope that this [passport] would give travelling a boost".

The Scandinavian country became the latest country in Europe to demand evidence of a negative coronavirus test for all travellers entering in the country taken within the last 48 hours prior to their arrival.

While Sweden has kept its borders relatively open compared to Norway and Denmark, the new coronavirus mutations have prompted the government to introduce new measures to stop the spread of the variants.

Elsewhere, Spain experienced one of its worst months of the pandemic in January, with 900,000 new infections recorded as the country battles a third wave of the virus, according to officials.

More than 60,000 people have died in the country since the pandemic began in March last year, the fourth worst death toll reported in Europe.

Despite problems with deliveries and distribution of the Pfizer/BioTech and Moderna vaccines, Spanish authorities say they are aiming to have 70 per cent of the total population immunised against the virus by the summer.