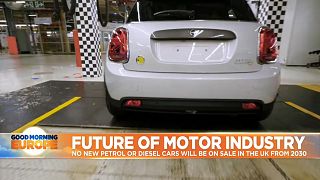 We know that the future of motoring is electric, but how quickly will we get there?

The UK is setting the pace. By 2030 no new petrol or diesel cars will be on sale there. David Bailey, professor in Industrial Strategy at the University of Birmingham, says the danger of this is that there is a date but it's "without a roadmap."

Carmakers know that petrol and diesel are on the way out, but the speed at which the UK is moving has created a unique challenge for domestic manufacturers. As Professor Bailey says, the move to electric cars "really is the biggest change in the auto industry for the last hundred years". Car manufacturers operate in production cycles that last about six to seven years. According to Bailey, manufacturers need to reorientate their research and development now towards electric cars to be able to reach the 2030 deadline.

It's an ambitious change for the UK and for the better, but it could have unintended consequences. The European car giant, Stellantis, has described it as “brutal” and warned that it could close its factory in the English midlands which makes Opel and Vauxhall Astra.

Greg Archer, the UK Director of Transport and Environment believes the deadline is possible. He says that "car manufacturers plan to have 325 new electric vehicle models on the market by 2025. That’s five years before the deadline. So the companies that are saying it isn’t possible are the ones who want more time to catch up with their competitors".

Brexit and the car industry

Until recently, the UK built more electric cars than anywhere else in Europe. But with the recent surge in demand coinciding with the uncertainty of Brexit, that has now changed. The EU is now leading the way in the development of another crucial part of the electric supply chain: new factories to build batteries.

Stephen Gifford is the chief economist at the Faraday Institution. He says that "battery manufacturing and the actual manufacturing of the car will be very close together. Batteries are pretty heavy to transport around the world. New plants are coming up in eastern Europe, in Scandinavia whereas the UK has only got that one plant near Sunderland". He believes that the UK is behind in the race to produce electric cars, but that there is still time to catch up.

Brexit has also created another complication. For UK built cars to be sold tariff-free in the EU, by 2026 their batteries must be mostly made from local parts. It's just one more element putting the accelerator on this revolution.