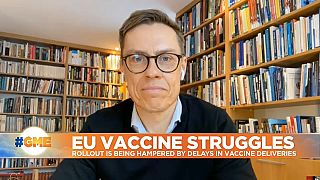 The ongoing row between pharmaceutical giant AstraZeneca and the European Union over the delivery of COVID vaccine doses to the bloc was a public relations failure for both sides, a former premier of Finland has said.

Speaking in an interview with Euronews, Alexander Stubb, a former Finnish premier, argued that the EU was doing a good job with its vaccine rollout but it was facing a "new" and "difficult situation" in its ongoing contractual disagreement with AstraZeneca.

"I think we are all facing a new situation. It's a very difficult one, both for the companies and then the other contractual party. Of course, we'd love to live in a world where everything would work perfectly and the rollout would go exactly as expected but that simply does not happen in these kinds of cases," he told Euronews.

The EU and the UK-based laboratory are locked in a war of words after the company told the bloc that there would be a 60 per cent shortage in its agreed doses in the first quarter of this year.

Both sides held "constructive" crisis talks on Wednesday to try to resolve the matter but have so far failed to reach an agreement.

Stubb praised the European Commission for its negotiating power but admitted that the situation doesn't look good for the EU.

"The EU has the negotiating power. Had it just been a small member state trying to get doses, it wouldn't have got them," Stubb said. "But the situation [the row with AstraZeneca] doesn't look good now".

One contentious point in the fraught discussions is the absence of a so-called "first come, first served" clause, according to the EU.

German MEP Peter Liese warned that the EU risked a trade war with the UK, which ordered its doses three months in advance of the EU, over the supply of vaccine doses if the EU did not change course.

Stubb also criticised the poor communication on both sides in what is becoming a public relations disaster for both parties, he said.

"I think probably AstraZeneca need to look at their communication strategy as well [as the EU]," he told Euronews. "I'm not very convinced that the way in which the company, and especially its CEO, came out early on in this discussion was conducive to diplomatic and constructive discussion for the future".

He went on to say that the only solution to the ongoing spat was "a robust and effective rollout of the vaccine".

"So, basically, it's all going to be about numbers. Can the EU stick to the aim of 70 per cent of the population vaccinated by the summer? Can the companies provide the number of doses that they promised?" Stubb said. "That sort of line is going to be key about communication.

"In that sense, I think that the Commission is stuck between a rock and a hard place. But I do think it's doing a fairly good job and the rollout will eventually happen."

To see the full interview with Alexander Stubb, watch the video in the media player above.