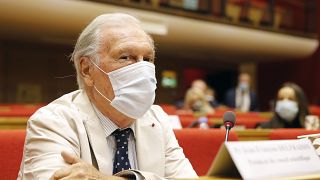 A third national lockdown "will probably be necessary" in France the head of the scientific council that advises the country's leaders, has said.

"If we do not tighten regulations, we will find ourselves in an extremely difficult situation from mid-March," Professor Jean-Francois Delfraissy said in an appearance on French broadcaster BFMTV, adding that this week was critical in France's fight against COVID-19.

President Emmanuel Macron's government is set to meet on Wednesday to decide whether extra measures need to be introduced.

Delfraissy called for swift government action amid rising concerns about the spread of new, more contagious variants of COVID-19 discovered in the UK, South African, Brazilian and now California.

He added that these variants "are the equivalent of a second pandemic".

Citizens in metropolitan France must currently abide by a strict nationwide curfew from 6 pm to 6 am every day, and must only leave their residence between these times for a valid reason and with an exemption certificate.

Shops and services, including public libraries, are open but must be closed at 6 pm, but bars, restaurants, cinemas, theatres, museums and gyms remain closed.

He added that the spread of the variant on French territory may be a determining factor in the strategy the government employs to combat the virus in the coming days and weeks.

Delfraissy did not say if a lockdown would resemble the strict measures first introduced in March last year or the slightly looser restrictions in October 2020, when schools remained open.

Cases were hitting 50,000 a day and intensive care departments in hospitals were at 95% capacity when France announced its second lockdown back in October.

Now, the figures aren't as dramatic, with the weekly average of new cases at below 20,000 per day and the number of intensive care beds that are occupied at 58.4%.