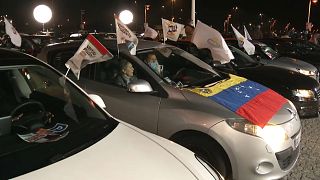 Is the far-right gaining popularity in Portugal?

Portugal will head to the polls on Sunday to choose a new president, but for the first time in the history of the country, the election is being carried out under a state of emergency.

The campaign has also been marked by a new right-wing, anti-establishment party called Chega! who is fighting for the political stage and aiming to take votes away from incumbent President, Marcelo Rebelo de Sousa.

André Ventura, leader of Chega! (Enough!), claims to be “the only right-wing candidate” and wants to run a second round against incumbent Marcelo Rebelo de Sousa. But what are his chances?

How did Portugal get to this point?

At a "drive-in rally" near Porto, André Ventura tries to cushion the impact of the pandemic on Portugal’s Presidential campaign. He says he’s reaching out to voters fed up with the current political system, insecurity and economic woes. By his side is party member, José Lourenço, who earlier told Euronews about the possibilities of the right-wing group:

"Chega! could really become a political success as much as it could fail. It could have a meteoric rise and then plummet. We know this and we don’t want it to happen".

Right-wing political parties from other countries have shown their support to Chega! France’s Marine Le Pen even went to Lisbon to support Ventura.

His party is seen as anti-immigration and xenophobic. The party members deny that it is racist. But racism is reportedly on the rise there, as an alleged death threat to activist Mamadou Ba can attest. Mamadou Ba is the leader of NGO movement SOS Racismo. He describes the right-wing party as "two different things, but one doesn’t exclude the other. Xenophobia and racism are almost Siamese twins, if we were to use a medical language. Whenever there’s xenophobia there’s racism and vice-versa, these are concepts supported by the idea of excluding someone."

Could Chega! really rise to power?

Much could depend on whether voters reluctant to show their support publicly will turn out on election day.

Carlos Jalali is a political analyst at the University of Aveiro. He says that everyone knows there is "latent dissatisfaction and that Chega! is starting to reflect that, although the party only represents 1% of the electorate. In the current context, it seems highly unlikely that Chega! could become a dominant force in the political system in Portugal. It will be interesting to see if there is this effect of the shy voter just like what happened with the Trump Presidential election back in 2016."

Two big questions shroud this election: will silent voters cast their ballots and back Chega! on the 24 January? Or will the ongoing pandemic have an impact on who and how many people turn out to vote?