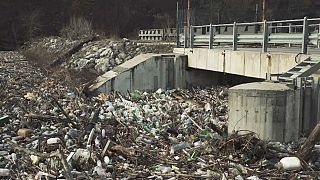 Bulgarian authorities were left clearing up after heavy rains and floods struck several towns in the west of the country.

Most of the 40cm deep layer of rubbish that has been piling up in the north-western city of Svoge washed in from the capital Sofia, around 40 km away.

A hydroelectric dam is the first obstacle in the way before objects reach the Danube River up north and the rubbish mass there is currently about the size of a football pitch.

Some in the city have attributed the pile-up to people using the river as a dump. Municipal employees were allegedly caught disposing of a truckload of rubbish on a riverbank last summer, a claim which the deputy mayor of Svog denies.

"The garbage was just left there temporarily until a lorry could pick it up," liya Bogdanov said

According to the mayor's office, the city is neither responsible for, nor capable of, the river's upkeep.

"There is no way we can send an inspector whenever someone's out having a picnic or whenever there's a construction site and they throw everything in the river," according to Bogdanov.

Cleaning up the floating island of rubbish is tricky. The geography of the region makes it impossible to gather up the large clumps with a boat or a lorry and the only way to do it is by using the dam's own removal system.

Vesselin Shumanov from Svoge Hydroelectric Power Plant said: "The only sensible way of cleaning up this rubbish is to do it little by little.

"We're getting water levels down and taking small chunks of garbage in to remove it.

"Part of the rubbish will get through but it will get picked up by the cleaning system on the next dam downstream. There are five dams in total."

The same thing happened in the summer six years ago, but this time around there's the additional danger of dropping temperatures causing the water to freeze, meaning the floating landfill could then stick around for a lot longer.