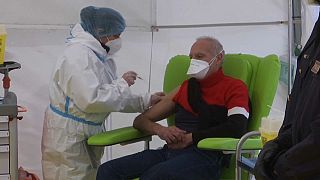 Italy's vaccination programme is well underway. More than half a million people have received the jab so far with health care workers and care homes staff at the front of the queue.

For many doctors and nurses who have been on the frontline in the fight against COVID-19, getting the vaccine is more than a way to protect themselves.

For Doctor Guerra, who despite her health issues has carried on treating COVID-19 patients, it almost feels like the end of a nightmare.

“I was very anxious at the time I was working in the COVID-19 ward. So you can imagine what a meaningful experience today is for me”

Yasmine Marcella Irace, a young nurse who works in A&E and who herself recently recovered from the virus said, 'It’s impossible to explain what has been happening inside hospitals during the pandemic. Many things have been said about it but those who work there experience it in a different way. Both when it comes to realizing that sometimes there are battles that you cannot win. But also because we fell ill ourselves. Everyday we are overwhelmed by emotions.”

She explained that she had a few doubts about taking the jab but felt compelled to do so for the sake of the community and her role as a nurse.

Director of the local health unit Angelo Tanese agreed on the importance on the role health staff had to play during the vaccine rollout. “It’s the very purpose of what we do and of the service we provide which is not simply about fighting against an emergency, but also about protecting the community. The vaccination campaign is a good example of that”

But there has been a disparity in vaccination rates from region to region. In Lazio around 70% of the doses delivered have been used so far. While in the Campania region, hospitals finished their first stocks earlier than in other areas. Health authorities in the Lombardy region have been under attack for administering far fewer vaccinations than they planned.

Keeping the rise in the number of COVID-19 cases in check is said to be crucial for the effectiveness of the vaccination campaign. There is an ongoing debate among healthcare workers as to whether the vaccine should be made compulsory for them. For many doctors being the first ones to receive a jab sends a message of encouragement to those who are still hesitant. That’s why they are wearing a pin which reads “I got the vaccine.”