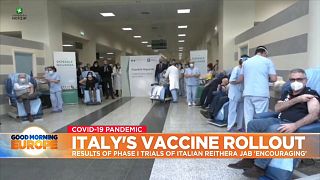 Italy's government is aiming for COVID-19 vaccine independence as it invests in a local biotech company following "encouraging" Phase I trial results.

Domenico Arcuri, Italy's COVID-19 emergency commissioner, said earlier this week that the country would invest in Italian biotech company, ReiThera, to support the development of its vaccine.

The single-dose vaccine, developed in cooperation with Germany's Leukocare and Belgium's Univercells, was tested on 45 volunteers aged 18-55, with 94 per cent of them still producing antibodies against COVID-19 28 days after receiving the shot.

Phase II and III trials — during which the vaccine is administered to thousands of people to test it is safe and efficient — are to start shortly with results expected towards the end of the summer.

"If the data obtained so far are confirmed, in the coming months we will have an effective and safe vaccine with a single dose. It will be produced entirely in Italy thanks to our scientific excellence," he added.

Italy started its vaccination campaign on December 27, at the same time as most European Union member states.

EU countries are so far only using the Pfizer/BioNTech vaccine but will start using the jab developed by Moderna in the coming days. The European Medicines Agency said on Friday that a third vaccine, developed by AstraZeneca/Oxford University, could be approved by the end of the month.

Italy had by Friday morning administered the vaccine to more than 413,000 people — the second-highest tally in Europe after Germany — with a near 90,000 increase over the previous 24 hours.

The country plans to vaccinate 6 million people by the end of March and 14 million — just under a quarter of its population — by late April.

A shortage of medical staff is seen as the main problem towards reaching that goal. The government has announced that it will recruit 15,000 health care workers to fill in the gap.

Watch Giorgia Orlandi's full report in the player above.