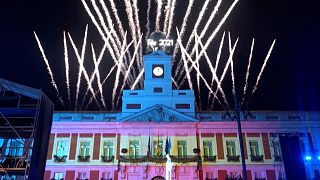 The capital cities of European countries rang in 2021 with fireworks displays but things looked rather different from New Years gone by due to the COVID-19 crisis.

The Eiffel Tower was lit up at midnight to mark the New Year as a curfew was implemented in France to try to contain the spread of the coronavirus.

Fireworks filled the sky briefly around the Brandenburg Gate in the heart of Berlin, where normally hundreds of thousands of people come to gather and celebrate Germany's biggest New Year party.

New Year's Eve in Rome was a largely virtual affair, given Italy's government imposing a nationwide lockdown and curfew over the holiday in a bid to prevent a resurgence of coronavirus infections following a violent second wave this autumn.

Fireworks marked midnight, but the concerts in piazzas that typically ring in the New Year in Rome have been cancelled to prevent crowds from forming.

Instead, the City of Rome held a live streamed cultural event with musical performances and contemporary art installations at some of the city's most iconic locations, including a massive bonfire in the Circus Maximus.

Italy, the first country in the West to be slammed by COVID-19, has the highest death toll in Europe with more than 73,000 victims.