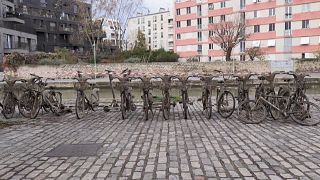 In a Paris suburb, mud-coated bikes are lined up alongside a canal.

They were among 52 cycles from the city-wide rental network - called Vélib - fished from the water by volunteers at the weekend.

The haul from Ourcq canal in the suburb of Pantin also included a scooter and road signs.

Volunteer Clément Charret said 20 Vélib bikes were found in just half an hour.

Charret said the operator of the bike scheme had since recovered 15 of the cycles. City garbage collection services will take away the remaining ones.