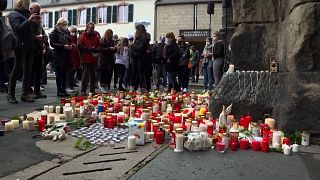 Trier's mayor Wolfram Leibe led a ceremony to honour the five people killed when a man drove into a crowd of pedestrians in a shopping district in the German city.

A baby was among five people killed when a car tore through a pedestrian shopping street in the southwestern German city on Tuesday, police said, after arresting the driver.

Prosecutor Peter Fritzen said the driver, a 51-year-old Trier native, appeared to be suffering from "psychiatric problems" and had been under the influence of alcohol during the incident, in which 14 other people were hurt.

Police said they had "no indications of a political motive" after questioning the suspect, and Fritzen said prosecutors were considering requesting he be placed in psychiatric care.

At the same press conference, Leibe said those killed when the man drove his SUV into the shoppers included a nine-month-old and a 73-year-old woman.

Also killed were a 25-year-old woman and a 45-year-old man. Police have not yet released details on the fifth victim.