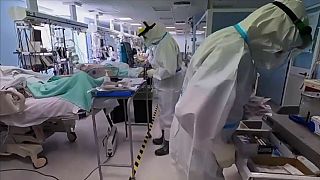 With a total of 5,000 extra doctors needed as a result of the pandemic, Italy’s longterm issue of a lack of medical staff has worsened.

Health authorities have said that there are enough ventilators to cope with the second wave but not enough medics to operate them.

"The problem we are facing is that only specialists can work inside intensive care units. That includes both specialised doctors and nurses. Figures are not encouraging though, we need 2,000 doctors who can operate breathing machines."

The government has planned to increase the number of ICU beds from the existing 5200 to a total of around 11,000.

Palermo said this "would mean adding more beds where there is already a lack of medical staff which means lowering the level of safety and quality of the treatments.”

Hiring trainee doctors who have not yet finished their studies has proved to be one solution.

Regions in Italy can make their own decisions when it comes to public health. In areas in the north of the country, such as Piemonte and Lombardy, local authorities have turned to NGOs for help asking them to send doctors from around the world.

The Association of Foreign Doctors living in Italy is a group that represents a total of 77,500 professionals including nurses. Full citizenship would normally be required in order to be hired, although given the emergency a recent decree has allowed their applications. However, only a few staff have been taken on this way.

The association has made an appeal to the government demanding that the legislation be applied nationwide.

Accounting for only 8% of the country’s GDP, Italy’s overall investment in the health sector is below the average of other European countries, such as Germany and France. A long-standing issue that is now hindering the fight against COVID–19.