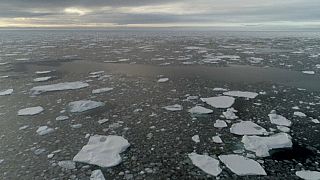 For the first time since records began, the main nursery of Arctic sea ice in Siberia has yet to start freezing in late October.

The delayed annual freeze in the Laptev Sea has been caused by freakishly protracted warmth in northern Russia and the intrusion of Atlantic waters, say climate scientists who warn of possible knock-on effects across the polar region.

Ocean temperatures in the area recently climbed to more than 5C above average, following a record-breaking heatwave and the unusually early decline of last winter’s sea ice.

Climate scientist Lars Kaleschke from the Alfred Wegener Institute in Germany said "This year, after warm summer, we see that the [amount of] ice is the second-lowest on record. We see a delayed freeze-up of this area and we currently have 4 million square kilometres less sea ice than usually expected compared to the 1980s. That's ten times the size of Germany that is missing."