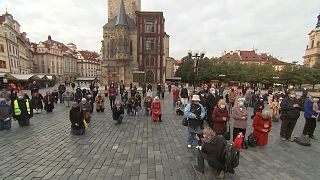 Dozens of people gathered in Prague's Old Town Square on Sunday for an outdoor Catholic mass.

Currently, indoor gatherings are limited to six people in the Czech Republic.

The priest leading the service said that while he understood the importance of the rules, "since the number of ill and severely ill is growing," it was "absurd" that other groups could meet in larger numbers.

"For instance political parties can gather with up to 100 people, but we are only allowed to pray in the church with six people. That is nonsense," said Jiri Korda.

On Friday, coronavirus infections in the Czech Republic surpassed 10,000 in one day for the first time.

The Health Ministry said the day-to-day-increase of the new confirmed cases surged to 11,105.

It is almost 1,400 more than the previous record set a day earlier.

After a series of new restrictive measures adopted by the government to slow down the surge, Health Minister Roman Prymula said he still expected a rise of those tested positive for about two weeks.