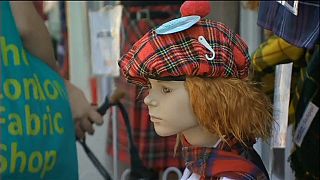 Scottish support for independence has reached the highest level ever recorded - according to a new Ipsos MORI poll.

Some 58% per cent of respondents now say they'd back Scotland leaving the union.

During the Scottish Independence Referendum in 2014, just over 44% of voters supported independence.

Dr Kirsty Hughes, director of the Scottish Centre on European Relations told Euronews there's been a pattern of increasing support:

"There has been a swing but it's kind of been gradually coming," Hughes explained, stating that by the end of last year, which was about three years into Brexit negotiations, the numbers were 50-50.

"And we saw from this June, basically the last four months, we saw the numbers go from 53 to 54, to 55 per cent in favour of independence, so that was already very much worrying London and causing a stir in the British media," she said.

Hughes explains that both the COVID-19 pandemic and Brexit are important topics for voters.

"We've seen since the Brexit vote that some Remain voters who were against independence now support independence and want (to stay) within the European Union, which is the Scottish government's policy.

Scottish Parliament elections will be held next May and with an SNP landslide expected, "things are hotting up," Hughes said.