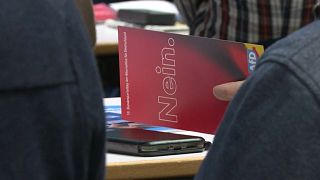 Several of these states have been a stronghold for the German political party in recent years.

The AfD runs on a platform of anti-immigration and anti-Islam rhetoric, and saw a surge in support when hundreds of thousands of refugees came into Germany in 2015.

It is currently the largest opposition party in the national legislature but has seen its national popularity decline significantly.

The party had capitalised on the disenfranchisement felt in Eastern states that supported its anti-migration message but some supporters would like it to become more moderate.

One official was recently fired from the party after saying that migrants could be shot or gassed.

The party is also opposed to reforms that tackle climate change and mobilised members to attend demonstrations in Constance, southern Germany this weekend.

_Euronews' Jessica Saltz reports form the capital Berlin. Watch her analysis in the player above.
_

Sweden and Finland's NATO accession 'to be fastest in history'