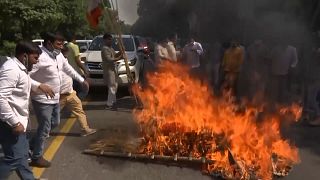 The gang-rape and death of a woman from the lowest level of India's caste system sparked outrage across the country on Wednesday, with several politicians and activists demanding justice and protesters in the streets.

The 19-year-old is the latest gruesome case of sexual violence against women to rile India.

The victim, who belonged to the Dalit community, was raped by four men on 14 September in the central state of Hathras district of Uttar Pradesh.

The woman's family told local media they found her naked, bleeding and paralysed, with a split tongue and a broken spine in a field outside her home. She died two weeks later, on Tuesday, after sustaining serious injuries.

Police said the four men, all of a higher caste, were arrested.

Uttar Pradesh Chief Minister Yogi Adityanath on Wednesday ordered a special investigation team to handle the case and said it would be tried in a fast track court.

In New Delhi, police detained supporters of the opposition Congress party and several female activists after they tried to march in the street shouting slogans against Adityanath and Prime Minister Narendra Modi.