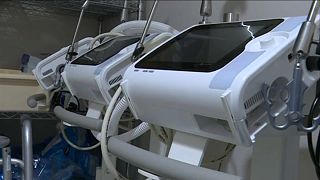 Hospitals across France are starting to postpone non-essential surgeries to free up capacity to deal with an expected surge of COVID-19 patients.

The management of Public Assistance - Hospitals of Paris (AP-HP) announced on Friday that it would start "deprogramming" up to 20 per cent of surgeries in the following days "due to both the dynamics of the epidemic development and the importance of urgent activity."

It came nearly a week after the CHU (teaching hospital) in Montpellier, in south-western France, said that it was activating its "White Plan" while includes the "targeted and moderate" deprogramming of some hospital interventions.

"The number of hospitalised patients has doubled in the past 10 days, despite the average length of hospital stay being shorter than during lockdown. This makes it possible to take care of more patients on fewer beds, but this turnover puts even more strain on the nursing and medical teams of the affected departments," the CHU said in a statement at the time.

France recorded more than 11,100 new infections on Sunday, making it the sixth consecutive day with more than 10,000 new cases.

Hospitalisations have shot up with nearly 6,000 COVID-19 patients being treated in hospitals last week, including 951 in intensive care units — a week-on-week rise of 40 per cent.

The positivity rate of tests has also continued to climb. It stood at 7.4 per cent on Sunday, up from 6.2 per cent three days earlier.

In response to the worsening epidemiological situation, the government unveiled new measures last week, which ordered the closure of all bars and restaurants in Marseille and on the island of Guadeloupe.

Bars and restaurants in another dozen major cities — including Paris, Lyon, Toulouse and Nice — must now shut at 10 pm at the latest while limits on social gathering have once more been tightened.

Sweden and Finland's NATO accession 'to be fastest in history'